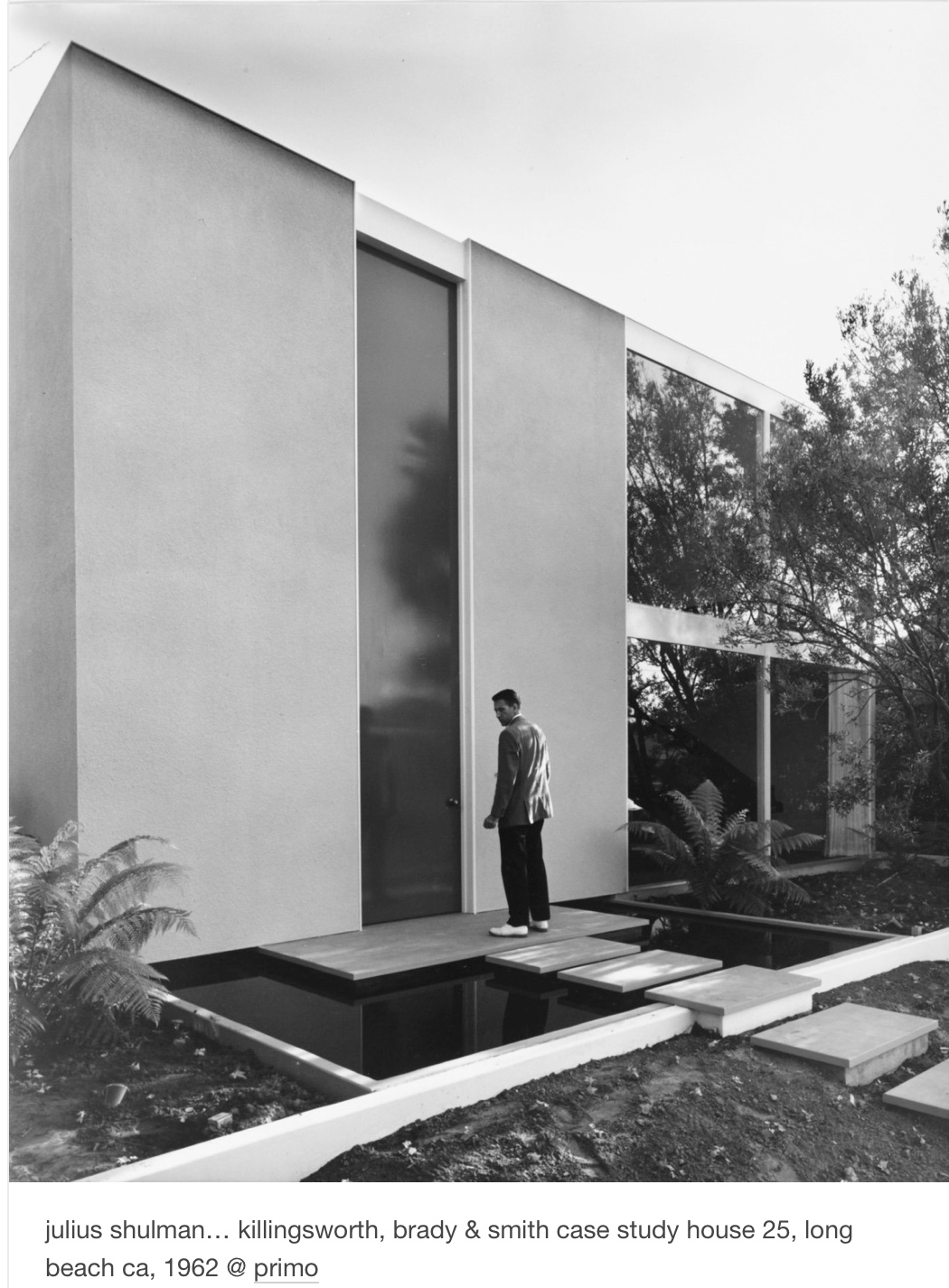 Do you live in a city or town with architectural layers?
It’s where many eras of architecture coexist, creating a rich tapestry of architectural style. In Southern California you can find in both residential and commercial structures Victorian, Art Deco, International style, Brutalism, Craftsman, Story Book, Tudor, Spanish Colonial Revival and more.

After World War II, the magazine Arts & Architecture invited notable architects and designers of the Modern movement “to begin immediately the planning, design and construction of eight houses, each to fulfill the specifications of a special living problem in the Southern California area.”
Eight architects including Richard Neutra, Charles Eames and Eero Sarrinen were asked to submit designs that fit the constraints of creating “good living conditions for eight American families within contemporary styles and strict budgets and most importantly… each house must be capable of duplication and in no sense be an individual performance.”

As insane and ambitious as the plan was it was wildly successfully, the houses were put on public display and had over 350,000 visitors when they were opened to the public before being closed and used by either the client the home was intended for or the architect’s own use. The program was so successful that it continued into the 1960s with almost 30 homes. Which leads us to a masterpiece of architectural design in Long Beach, CA.

Built in 1962, long after the original eight Case Study houses along the Naples Canal and designed by local architect Edward Killingsworth for boating enthusiast, Edward Frank, who owned the famed contemporary furniture store Frank Bros. It was rumored that Edward Frank stopped at the Killingsworth office on Long Beach Blvd. because the office design told you exactly what you could expect. What Frank wanted was someone to design a house with glass walls and build it on a difficult narrow lot with the main entrance on the canal so his friends could arrive by boat.

Stepping stones across a reflecting pool lead to an immense 17 foot front door that continues into the lath covered 2 story atrium that allows a vast and stunning private outdoor area that lets in light to the 2 story structures glass walls.

The house is still in incredible condition and surprisingly blends in nicely to the eclectic collection of houses around it. The house is divided into 3 parts, on the right side (facing the house) are the main living areas all the bathrooms, bedrooms the kitchen, living room and dining room are all the same side and the atrium on the left side.Below is a photo from the original article about the house, showcasing the atrium and walls of glass revealing the rooms within.Behind the atrium is the garage on the first floor and a terrace on the second. A large olive tree was planted to give the master bedroom some privacy from the canal. The original article talks about the architect worrying that the large front door would constitute a “performance” under the program, but the magazine found that the massive front door was essential to the experience of the atrium. 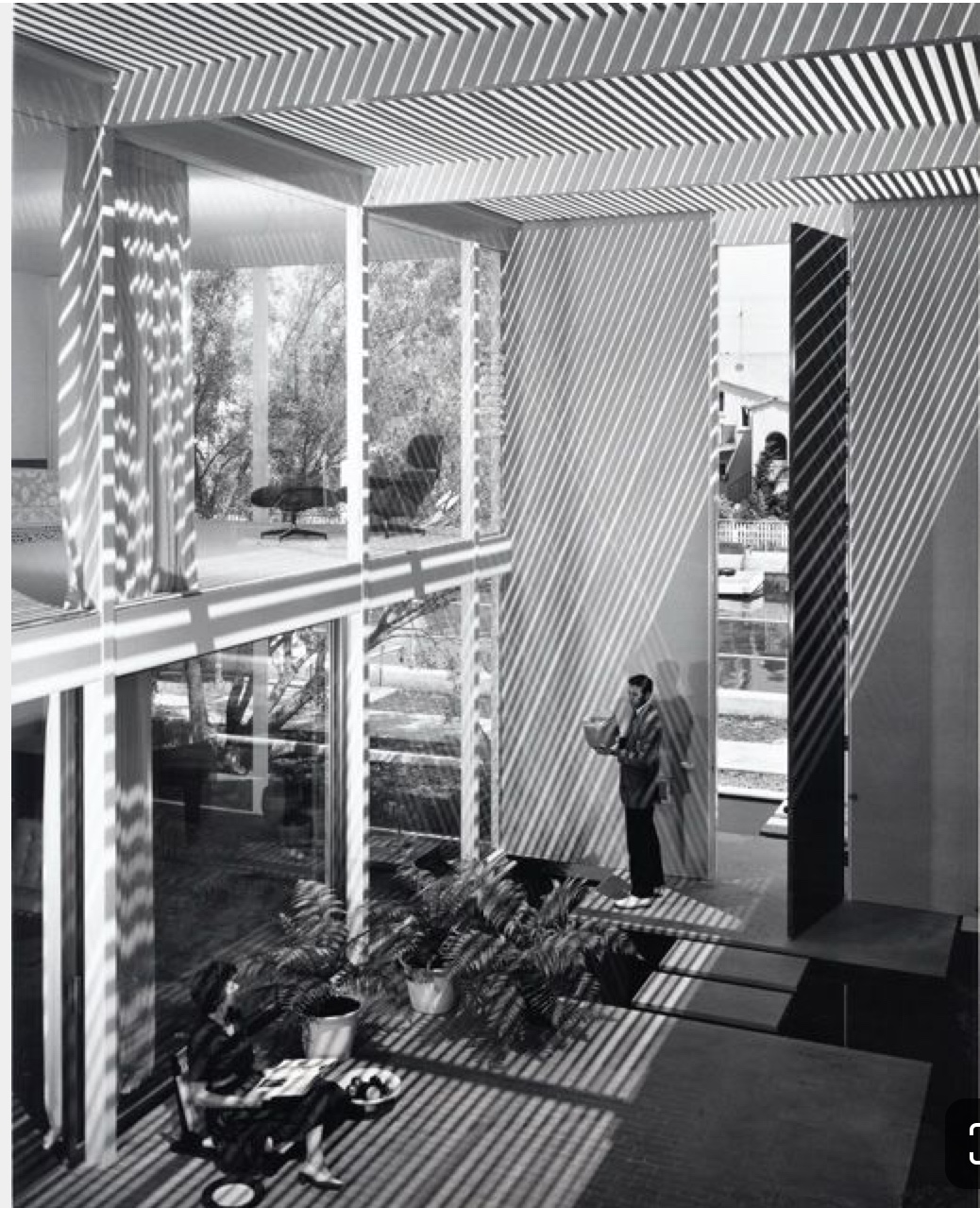 and don’t forget to peruse the last page of the article which lists all the materials used and includes all the interior furnishings which was supplied by Frank Bros., who was also tasked with furnishing the original 8 Case Study homes, on Long Beach Blvd. Frank Bros. closed in 1982, they leased their show room on Long Beach Blvd. to Danica furniture which was also another modern furniture retailer. Sadly, the Danica store succumbed to fire when the LA riots in 1992 spilled over into Long Beach.

Case Study #25, The Frank House, fortunately, remains a gem in Long Beach. Take the time to look at it the next time that you are strolling the canals in Naples.
http://www.artsandarchitecture.com/case.houses/pdf01/25.pdf

Follow this link to see an article on the house 2015 market listing
https://www.presstelegram.com/2015/03/02/the-frank-house-edward-killingsworth-designed-home-in-naples-on-market-for-25-million/

For ADA assistance, please email compliance@placester.com. If you experience difficulty in accessing any part of this website, email us, and we will work with you to provide the information.

Close
Sign Up
Already a User? Sign In
You have been successfully registered
Please check your email.
Close
Go to the homepage
Sorry something went wrong
Please try again.
Close
Try again